There is an artist called Ironklaw. 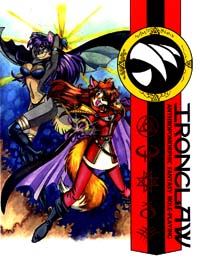 Ironclaw is a role-playing game by Sanguine founded on a dice comparison system and created with furries in mind. There are a total of 12 initial species, although players are encouraged to create their own.

The basic premise of Ironclaw is one of caste struggle on the mythical island of Calabria. The are four great noble houses locked in a struggle for superiority:

There are numerous other minor houses of various races that swear fealty of the four great houses.

Set in a European early-renaissance fantasy theme, players can select to become anything from mercenaries to wizards to scoundrels and everything in between.

The dice system is a bit unusual to most to begin with, and it isn't without problems, but it handles very well once players become used to it. All tests (skills, combat, finding things, etc) are run through comparing dice-rolls ranging from four-sided to twelve-sided in size.

One of the advantages the system does offer is flexibility from the lack of traditional 'classes'. A character can be a generalist following many paths with very little ease, but not at the cost of making focused 'class-style' characters unplayable. It is suggested that players do take a variety of abilities to make their characters more well rounded, however.

The magic system in Ironclaw is a modification of the skill system. A character slowly gains ability in casting a spell, going from an attempt through mental capacity of the character alone to doing it near effortlessly from practice and understanding.

There are four primary schools of magic but minor ones exist as well. The most common are as follows: 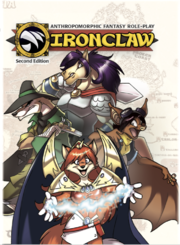 A second edition, titled "Squaring the Circle", was set for release on July 31, 2010, available as both a hardbound book and a PDF digital download.