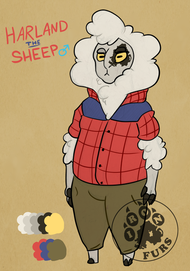 IronFurs is a regional furry group based in Northern Ireland, with the intent to create an active local furry community in the region. The group organises monthly meets both large and small in varying locations across the isle with Belfast being the main hub. Meets are arranged via Telegram with community input in mind and are open to attendees aged 16 and up, however public meets and events such as those held at local conventions are open to all ages assuming rules are followed. The group uses various social medias to post meet announcements and information on upcoming events.

IronFurs originally started as Telegram group on August 29 2018 made by Huckleberry Husky as an attempt to organise and hold an independent bowling meet in Belfast, after the success and large turn out it was decided to make the group permanent with further planned meets in the following months. The groups name was a suggestion made by Vasquez (a nod to the local term "Norn Iron", an abbreviation of Northern Ireland) on September 23rd and was made official by majority vote. Both the groups logo and mascot were made official during 2019 and were created by Cooking-With-Caesium on Instagram.

As of February 29th, 2020, the group was handed down to Vasquez as the main admin.