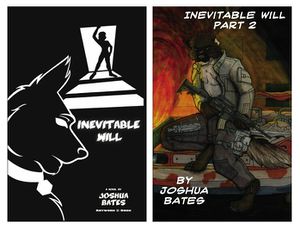 Covers of the Inevitable Will series.

An adults-only series, Inevitable Will revolves around "Lust and Violence in a war torn Future".[1]

The stories are set in the year 2281, when anthropomorphic "Furrs" are slaves to their human creators. A lone wolf finds himself trapped in an escalating storm of violence as a radical faction, known as the Liberation Front Army, wages a war of freedom against the Federal Slavery Office and its private army. At the same time, he is being pursued by the madman who killed his Mistress.