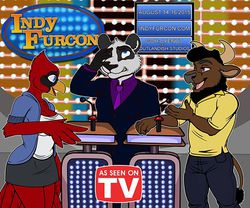 IndyFurCon 2015 was the sixth instance of the IndyFurCon convention. It was held over August 14 to 16, 2015, at the Indianapolis Marriott East, its first year at this location.

The convention theme was "As seen on T.V.", and Lyenuv was the guest of honor.