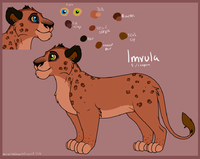 Imvula, as drawn by her creator.

Imvula, also known as Kreoko is an artist who lives in Portsmouth, England. Imvula lives with her fiancée, Tombi Itachizame, and their two cats.

Imvula's art is influenced by the style of Disney's The Lion King.

Imvula is a member of the UKFur.org and HantsFurs. Imvula does not attend furmeets on a regular basis, but, when she does, she can be found at the Southampton meets.

Imvula's primary fursona is a female leopon (leopard-lion hybrid).[1], who was originally created for a Lion King roleplay on a website called GreatestJournal, but unfortunately, the roleplay was abandoned. Unwilling to get rid of the character, she became a fursona or a representation of herself on the internet.

Imvula recently completed a Level 1 diploma in Land-Based Studies and is hoping to acquire a qualification in Animal Care in order to pursue her career goals. Imvula also spends her time living equally between Portsmouth wither fiancee and Southampton, with her grandparents. Imvula is an animal lover, having owned a plethora of pets over the years.