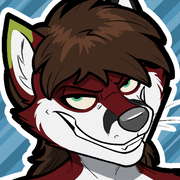 Ilia's fursona is a fox with primarily dark crimson colored fur and has an average height of 7ft 9in (236.7cm), an average weight of 263lbs (119.3kg), and on average stands at 94.7m (310.7ft) when macro. His fursona's full name is Ilia Tevuloyev and was created back in late 2014 as a Sonic fan character, until considering himself part of the furry fandom in 2016. He lives in a fictional world.

Ilia now owns a fursuit which was constructed by Charred Fursuits.