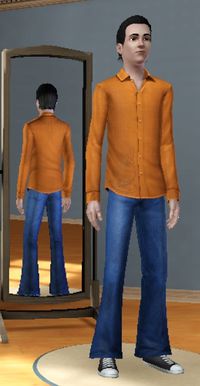 ilbv's Official Appearance and Reference (Image made with The Sims 3)

Well go on, go give him a hug, or rub his belly, he might let you, and even let you get an inside view.

His main character is a human who does his best to fit in to the world and to survive everyday life. ilbv's other characters include Pike (a large orca), Garth (a minotaur), Talon (a large Great White Shark, but smaller than Pike), Cinder (A 40ft Red Dragon), a Deathclaw named Gary, and some other lesser used characters such as: Surf (A Blue Whale), Reginald a Robot, and Felix (A Brown Rat with a white diamond on his chest.)

He is the main Protagonist in many stories and artworks, created by ilbv himself and even as fan art and gifts from his friends and family on Fur Affinity.

ilbv is a Prey and finds himself in many kinds of dangerous and voracious situations involving many different types of hungry beasts and creatures.

Creatures that gobble ilbv up the most are Dragons, Wolves, Horses, Orcas and Sharks. He also is eaten by many Macro Characters and by both Anthro and Feral Forms. Even Giants have found ilbv to be a tasty snack.

ilbv is used to being eaten, and every situation is different depending on who is hungry and what their mood is and the circumstances that both predator and prey find themselves in.

ilbv is a shy, nervous type of human, who has a heart big enough for everyone who wants some love, and he tries his best to please as many individuals as he can. He is very gullible and naïve about a lot of things. He always assumes the best good-hearted natures of everyone.

ilbv is often at the mercy of Garth, who enjoys to play with and tease his human possession. Garth has bestowed upon ilbv, an ability to be immune to digestion. Garth has also been known to transform the human into various things.

Garth the Minotaur is ilbv's main Guardian, he has of late laid back and allowed many others into ilbv's life to take care of him and keep him safe.

Garth is 15ft and very strong. He is feirce and cruel, but only because he cares so much. He has a soft side that rarely shows itself. His favorite food is human beings. Garth finds humans tasty and weak, a perfect meal for a strong predator.

When ilbv is in danger, Garth will protect him, most times by swallowing him whole, both to intimidate the enemy and to fill his always hungry stomach.

Garth is violent and abusive, but he will defend his territory and his friends from dangers. ilbv can come to Garth if he feels lonely or scared, and Garth will properly take care of him and protect him.

Garth's history isn't yet fully known, but he is of Greek Mythology and has mythical powers. He can change his size, and the size of anyone else should he so choose. Garth also has a transfiguration ability, but has yet to practice it in public.

Pike Trying to Gobble ilbv up.

Pike is a 36ft long Orca, quite giant for an orca. He was ilbv's imaginary friend as a child and is now one of his dearest companions and guardians. While Pike is as playful as a dolphin, he can also be a violent whale when necessary.

Sharks are afraid of him with the exception of a few friends like Talon and Garth. Pike dislikes the term "killer whale" because he believes that it sends the wrong message to people, however there are occasions where he loves to tease his prey with the term.

His main meals include fish, seals, squid, and sharks. Pike adores eating humans and other animals because of how good they feel sliding down his throat. Pike is a good friend and protector of ilbv and sometimes is mischievous with him. Pike has discovered that humans taste really good, and ilbv is a constant meal.

Pike loves to swim and jump into the air from the water. He can flip and spin at will, and has a love for life not often seen in this world. He, Talon, and Garth are good friends and enjoy teasing ilbv with their preadtory natures for him.