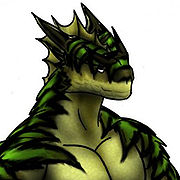 Depiction of an Iksar male from EverQuest II

Iksar are a race of lizardman created by Sony Online Entertainment for their massively multiplayer online role-playing games EverQuest and EverQuest II. The Iksar were originally introduced in EverQuest's first expansion, The Ruins of Kunark.

The Iksar are an evil aligned race, but they have a poor opinion of all other races.

The Iksar were created by the god Cazic-Thule the Faceless, the ruler of the plane of fear. For most of the early history, they served as a slave race to the Shissar, a race of nagas. However, the Shissar angered their own gods and were destroyed by the Greenmist, allowing the Iksar to rise in their place.

Originally divided into six major tribes, the Iksar were united by the necromancer Venril Sathir, who ruled from Sebilis. After delving into the secrets of the Shissar and making a pact with Innoruuk, Venril was betrayed by his son, Rile Sathir, who trapped his father's soul in an amulet.

Rile continued his father's legacy and the Iksar conquered all of Kunark except for the land held by the giants and the dragons. The dragons of the Ring of Scale knew that the Iksar were a threat but voted against direct action; however, the dragon Trakanon, who had advocated for war, ignored the vote and assassinated Rile Sathir by summoning a great storm that sank Rile and his navy beneath the ocean.

The next Emperor, Atrebe Sathir, delved into the magic of the Shissar to create the Sarnak, a Iksar/Dragon hybrid, to serve as soldiers, and the Sokokar, a Dragon/Froglok hybrid, to serve as flying mounts. Able to fight the dragons on land and in the sky, the Iksar were nearly undefeatable.

With no heirs, the Iksar created the Emerald Circle comprised of five wise leaders. However, they soon fell to petty squabbling and the empire was divided. Taking advantage of the Iksar's weakened state, the slave races revolted and enemies from abroad invaded. In a final, crushing blow, Trakanon returned and laid waste to all that remained, ending the reign of the Sebilisan Empire over Kunark.