Icaron, also known as Gryphius, [1] is an MLP and furry artist. Their primary specialty is transformation art. Icaron has participated in the furry fandom since the early 2000's and been an active artist since 2008.

Icaron's fursona, Arvid, is a feral gryphon, they also use several other characters regularly such as Camber, an enfield, and Saga, a pegasus. These characters all frequently feature in their transformation works.

Icaron first became acquainted with the furry fandom through the Transformation Story Archive and Transfur in 2003/2004, then later through Deviantart and Furaffinity beginning in 2005 and 2007 respectively, although their most recent and active Furaffinity account, Icaron, was created in 2012.[2] 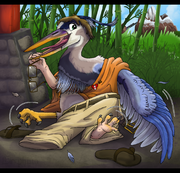 Much of the drawings made by Icaron are digital, utilizing Adobe Illustrator or Adobe Photoshop and a Wacom Tablet, though they sometimes utilize traditional means to accent their digital work, or to create completed works, with the primary medium being watercolor. They first began drawing in 2008, doing general anthropomorphic art and fanart of the Silverwing TV series before branching further afield into MLP in 2010 and transformation in 2011.[1]