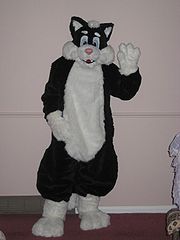 Hypr is a furry artist and fursuiter who lives in Guelph, Ontario, Canada. His fursona is a cat.

Much of Hypr's artwork involves different genres of art work, he had his start doing fat and inflation but now has been experimenting with other genres.