HuggleHugBug, Amethyst (born September 10)[1] is a furry artist who lives in Wales, United Kingdom.[2] She is a staff member on the furry social app Furry Amino as of March 19, 2017 and has since become a leader of the application. 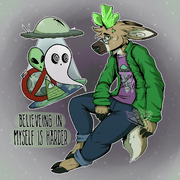 Art of HuggleHugBugs fursona, Clove, by herself

HuggleHugBug's main fursona is Clove Mohs, a male anthropomorphic white-tailed deer with green crystals in place of antlers. Known to be easily frightened and paranoid, is the more creative and hobby based side of her. Light brown fur, with white freckles. Wears a green checkered shirt and has glasses.

He has the ability to see ghosts and spends his life investigating the paranormal and strange.[3]

HuggleHugBug entered the fandom in late 2015, and made her first fursona, Bandit Strype, on March 6, 2016, just after the debut of Disney's Zootopia. She began creating anthropomorphic art around august 2016, and has being doing paid digital commissions since January 2017.