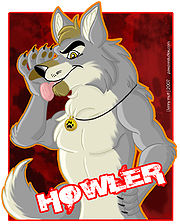 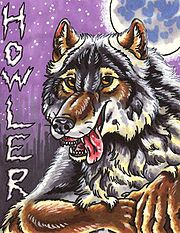 Another con badge, by Watergazer.

Howler has been an official fur since April, 1999 and kept to himself at first, mostly lurking in the shadows. His online fursona is a grey werewolf with a brown goatee and headfur and a gold paw necklace which he wears around his neck. He is bisexual and, as of February, 2009, resides in Daytona Beach, Florida.

Howler has been writing in the fandom since 2007. He is a transformation fan.