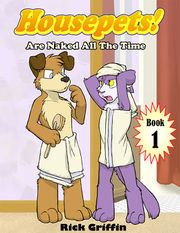 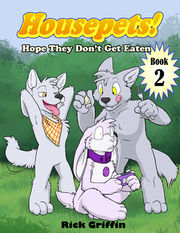 Housepets! is an anthromorphic webcomic by American cartoonist Rick Griffin. The comic is loosely based upon a series of sketches created in Griffin's childhood about a dog named Bino, who also appears as a supporting character in the comic as it exists today. Griffin came up with the idea of expanding his sketches into a full webcomic in 2006, drew up a few rough strips in 2007, and unveiled the comic itself on June 2, 2008. Housepets! won the Ursa Major Award for Best Anthromorphic Comic Strip from 2009 to 2017.[1][2][3][4][5][6][7][8]

The primary setting of Housepets! is Babylon Gardens, a suburban neighborhood somewhere within the United States (the strip itself does not specify the exact location of Babylon Gardens, although Griffin states that the Sandwich house was based upon a former residence of his in North Carolina). In the Housepets! universe, most animals are sentient. Mammals with paws are fully anthropomorphized, able to speak and walk upright; mammals with hooves (and all other animals) are non-morphic, but retain the capacity for speech. Pets live twice their normal lifespan. Animals also enjoy certain rights (for example, a police dog can arrest humans, complete with a fictional legal precedent cited), but wild animals not kept as pets have no legal status. Most pets are regarded much like surrogate children, referring to their owners as "Mom" and "Dad" as well as adopting their surnames, and may be kept by humans who opt not to have children of their own. Also, the intoxicating properties of orange soda are exaggerated.

The action of the comic revolves around the lives of the various pets living in Babylon Gardens, although many strips focus specifically upon Peanut Butter and Grape Jelly, pets of the Sandwich family. Most strips adopt a "slice of life" approach, depicting pets dealing with common problems such as coping with boredom, visiting the vet, and interacting with other pets in the neighborhood.