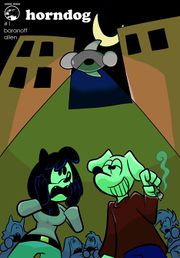 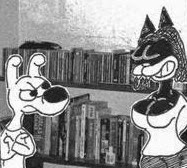 The online edition of the strip began in 2009 and was initially hosted on Geocities, continuing on Angelfire and Smack Jeeves until settling on Blogger. The strip has remained independently published in all of its incarnations.

Horndog has been relaunched multiple times, with its storyline rewritten in different forms, so that different incarnations of the comic vary in content and approach. The graphic novel Horndog, published in July 2014, shortens the storyline to mainly focus on Bob and Charlene's relationship, presented in a non-linear chronology inspired by the films of Quentin Tarantino to reflect the style of Baranoff's prose novels.

Horndog focused on Bob, a skirt-chasing, marijuana using canine, who often finds himself in surreal adventures, primarily involving a variety of sexual experiences. Horndog is set on a planet — or alternate dimension — which closely resembles Earth in its development, culture and structure, but is inhabited by anthropomorphic animals. The strip establishes that the setting retains much of the same country and city names as Earth.

Most of the characters represent African Americans, with white dogs representing whites. The setting is strongly urban, but the actual city name is not specified. The strip strongly favors cannabis use, with hard drug users portrayed unfavorably.

Bob, a smooth talking dog, engages in meaningless sexual "conquests" with women which he doesn't admire or love. He meets Charlene Kat, an individualistic African American woman, and begins a relationship with her, but continues to sleep with other women, even though he ends up feeling bad about it.

Leonard, Bob's best friend, sees Charlene as the victim of Bob's insensitivity. The romantic relationship shifts between a number of different phases, with Bob and Charlene breaking up, then struggling through an open relationship while Bob continues to pursue questionable engagements with other women.

Charlene is conflicted over the reality of their relationship and its potential, having an unsuccessful one night stand with Leonard. Ultimately, Bob and Charlene gain happiness when Charlene helps Bob to realize that his relationships with women he does not live is a form of self-hatred, and they happily continue their open relationship when Charlene influences Bob to practice sexuality as a celebration of his self-esteem.

Horndog incorporate elements of comedy, political satire, philosophy, romance, science fiction, horror and other genres; the character of Andrea Mouse, originally introduced as a psychotic stalker of Bob's, shifted into being a horror movie-style killer, and several plotlines are similar to slasher movies as well as zombie movies, such as one storyline in which Bob's roommate Freddy dies and comes back as a zombie and another in which Bob and others face an army of the living dead. Horndog often features pop culture references in-jokes, such as a reference to Billy Bong Thornton, a tribute to the comedy film Half Baked, as well as literary references and quotes from assorted books and films, ranging from Fear and Loathing in Las Vegas to The Fountainhead.

The characters belong to the hip hop subculture, and references are often made throughout the comic's run to hip hop artists, albums, and songs. The comic's stories are often surreal in nature, but it also explores a number of social issues, including racism, drug use, AIDS, and abortion.

Dramatic aspects within the strip are rare, and the stories are generally strongly comedic. The comic's themes include a philosophical analysis of the effectiveness of open relationships, in contrast with free love, as well as the advocation of strongly pro-marijuana philosophy.

In 2018, a reboot issue was produced drawn by Robbie Allen,[1] and published by Oriental Studios.[3]

In 2021, the issue was renumbered as issue #15, reconfiguring it as part of the original series, as part of a planned series of reissues from Funny Animal Entertainment.[4]