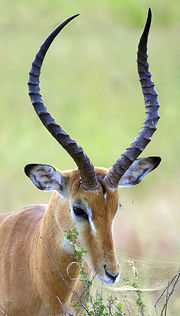 A horn is a pointed projection of skin on the head of various animals consisting of a covering of keratin and other proteins surrounding a core of live bone.

Horns are commonly made of keratin, a hard natural substance from which fur and claws are also made. In most animals, they grow continuously through an animal's life, sometimes in a continuous curve or curl, and are not shed. They also commonly occur in pairs.

The eartufts of owls are sometimes called horns, but these are merely clumps of feathers which happen to be located on the top of the head.