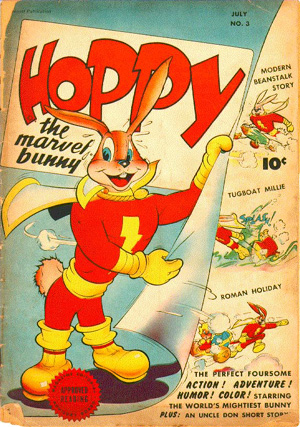 Hoppy the Marvel Bunny is a comic book superhero and an anthropomorphic pink rabbit.

Hoppy was created by Chad Grothkopf (1914 - 2005) in 1942.[1] Originally published by Fawcett Comics as a funny animal spin-off of their popular Captain Marvel character, he got his own comic book (Hoppy the Marvel Bunny) in 1945. His actual superhero name is Captain Marvel Bunny (or simply Marvel Bunny), and his mild-mannered alter-ego is referred to simply as Hoppy.

Hoppy is now owned by DC Comics,[1] and has made periodic appearances in Captain Marvel-related stories. He also appeared in The Oz-Wonderland War comic book miniseries alongside Captain Carrot and His Amazing Zoo Crew. Hoppy was lampooned in a short featured on the DVD release of The Incredibles.

Hoppy has powers roughly similar to those of Captain Marvel. He accesses his powers by yelling "SHAZAM!" but his pantheon differs. His patron deities are Salamander, Hogules, Antlers, Zebreus, Abalone and Monkury.