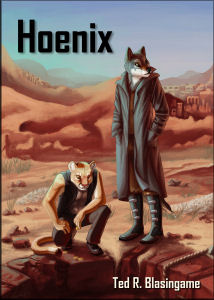 Hoenix is an anthropomorphic spin-off novel from Ted R. Blasingame's thirteen-year Blue Horizon series. The 303 page trade paperback is available through the author's Lulu Press bookstore, as well as online to read chapter by chapter.

Aramis Thorne was a wolf with no memories of a possible past life of piracy. When he is approached with an old starship of questionable reliability, his life takes a turn for discovery and tragedy with the legend of an ancient city's treasure snapping at his heels.

Hoenix appeared on the Ursa Major Awards 2004 Recommended Reading List and was later a nominee for Best Anthropomorphic Novel. The book was reviewed by Fred Patten in the October 2004 edition of The Claw & Quill.