The following covers the history and controversies of the image board Lulz.net.

On July 25, 2006, in preparation to moving the site to a new server, WTFur's splash page was replaced by cho0b with a fake notice from the US Federal Bureau of Investigation, National Security Agency, MPAA, and the RIAA, "informing" the viewer that:

With the addition that their IP has been logged, and to:

Clicking on "Piracy Doesn't Pay" lead to a placeholder image board on the server (/temp/,) with the title /pedofur/. Finally, until the move was completed, all hosted images were archived in a single RAR image, and uploaded to the The Pirate Bay, a BitTorrent tracker.

The original "takedown" image can be found at Vxbinaca.beevomit.org, under the section "7/24/06 FBI Takedown joke page."

The board re-appeared on August 25, 2006 as "Lulz.net." A European server was also chosen due to more lax copyright rules overseas, which meant that what little of a DNP copyright protection "WTFur" had could now be completely disregarded.

Many visitors to Lulz take issue with the board's "hands-off" approach to posting and moderation, allowing all manner of media content (PG to X, straight, gay, vore, scat, cub art, etc...) to be posted mixed, side-by-side on the site's single board.

Though controversial, the moderators defend this choice by reasoning that it will expose users to art or artists they would not have seen otherwise, and that because users are prone to complain about posts in categories no matter how finely they are divided, dealing with those complaints in a single board only saves the moderation team a great deal of time. And so, any future requests by users to subdivide the content of the board into smaller categories, will, as stated before (see "Policies and content",) be ignored.

Furthermore, there have been accusations of the moderating staff standing idly by in the past as a direct result of these policies, when threads have been posted that users object to, but do not necessarily break any of the site's rules, or the moderation team is slow to remove spam or invasion posts from the page. Though there have been requests by a small group of users to take down threads featuring cub or commercial work, such as work by Palcomix, the moderation team does not appear to remove such material.

These policies have been in place since Lulz's inception, and, for better or worse, remain unchanged to this day.

cho0b, confused as to why he could not login to any of his sites, redirected the Lulz.net domain name. That night, Arcturus purchased the domain name Sidechan.net, and setup the DNS to point it at what was currently lulz.net, transferring all of the content from it to the new site, while deleting all data owned by cho0b hosted on his server for the websites WTFux.org, digital-jihad.net, w-t-c.info, 4-20.info, and a few others.[citation needed]

After cho0b inquired about the reason he did all this, Arcturus responded that it was because "You fucked with me."[2] 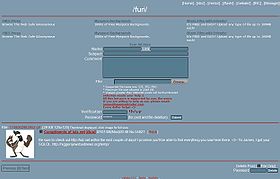 Only a week before Sidechan went down, cho0b (using the pseudonym jihad) said the following to Arcturus at the end of a lengthy discussion:

On January 7th, 2007, Sidechan was hacked by someone posting by the name "jihad" (believed to be cho0b), and all of the boards were wiped clean of their content, with an advertisement for lulz.net popping up on /furi/ before sidechan went down completely. 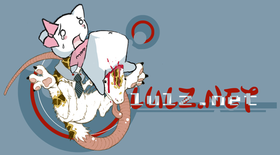 Lulz came back on line the same day Sidechan was hacked in January 2007. The set-up is still a single board approach and a lack of a DNP.

The front-page sported a temporary photoshopped version of the Sidechan logo, with name changed to "lulz.net" (using the Disney font,) and sidechan's mascot Downsy "head-fisting" the persona of 4chan's moot.

On March 9th 2011, Lulz.net host (DreamHost) banned the Lulz domains from their servers due to several DMCA notes. It was confirmed later on that these notes were submitted by Onta[3]