HistoriMorphs is a fanzine published by Sofawolf Press that features stories about real-life historical events, but told from the point of view of, or seen through the eyes of, anthropomorphic characters, as though they were there at that point in time.

Issue #2 of HistoriMorphs was published in July, 2004, and features cover art by Vince Suzukawa (front) and Tom Nugent (back).[2] The stories within are: 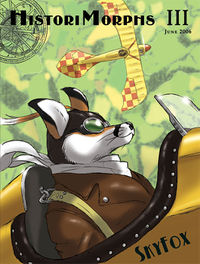 HistoriMorphs issue #3 was published in July, 2006, and has cover and interior illustrations by Gideon, Mitch de la Guardia, Heather Bruton, and Lanny Fields.[3] This issue's stories are: