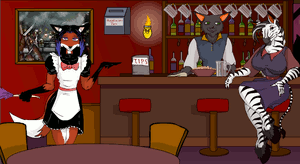 Initial scene of the bar at High Tail Hall

Clicking on a specific hanger in the storage room will take the player to a hidden room where they can enter the code on an unidentified electronic device. This triggers a scene that shows three red circles with the numbers 13, 85, and 27 on them, with each number being shown above a different circle. 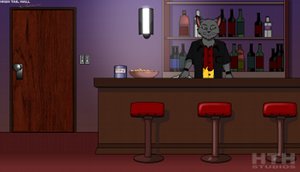 Screenshot of the redesigned bar in High Tail Hall Classic

While continuing development of the original incarnation of HTH Studios Presents: Rio, Crowchild revealed the existence of a new flash game project code-named "Project X" on his FurAffinity account on October 29, 2007. Additional clarification was given that the side project was not the anticipated High Tail Hall 2.[4]

High Tail Hall Classic was dropped in favor of recreating the original hall on the island while keeping the new locations and characters. 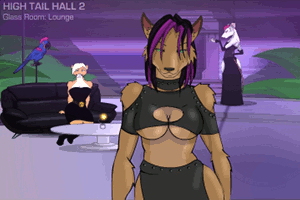 Upon Jack Salem discovering in 2008 that High Tail Hall was relaunched, the Twilight Cavern project became a separate project, dropping "High Tail Hall" from the title and removing Crowchild's characters and any ties to them. Jack stated on YiffStar, the same website the project was first announced on, that he was continuing to work on Twilight Cavern.

Jack Salem later posted on the YiffStar forum that he started a commission service as a fundraiser to support the re-creation of the Twilight Cavern project. He was working on establishing a new website and planned on taking commissions for new characters shortly afterward.

OpenHTH was an open sourced community-created project based around High Tail Hall 1.7, whose goal was to vastly improve the game by enhancing existing content and adding new content to it.

The first and only version of OpenHTH was 0.0.2 which contained dialogue enhancements, replaced incorrect spelling and grammar, fixed typographical mistakes in the original HTH 1.7, added ambient music, and included background animation enhancements.

Users were encouraged download the latest version of OpenHTH and assist in adding content or enhancing the game, or download the base version of HTH 1.7 and create their own modifications to the game.

The plan of OpenHTH consisted of the following Phases:

The six-phase plan was designed to be repeated a large number of times by users who wanted to contribute to the OpenHTH project.

The OpenHTH project's webpage was later taken down and was archived on the Internet Archive's Wayback Machine.

The original Flash version of High Tail Hall used a combination of animated sprites/scenes created in Adobe Flash and pre-rendered backgrounds created in LightWave 3D while retaining the point-and-click gameplay of its predecessors. Additions to the initial Flash version of HTH included a real-time day-night cycle, a bird's eye map of the Cyana Archipelago and its numerous locations, and in-game puzzles that have yet to be solved by players.

Crowchild continued to develop the Flash version of the game every year until October 2017, with an average of three scenes per month and occasional updates to the in-game locations.

The Flash version was available as an in-browser open beta accessible to users who created an account on the HTH Studios website until it was removed on August 30, 2018 as part of HTH Studio's switch to a new website. After the transfer was complete, HTH Studios announced on September 29, 2018 that the Flash version will be re-released as an offline download in response to the continued depreciation of Adobe Flash on most major web browsers [10] 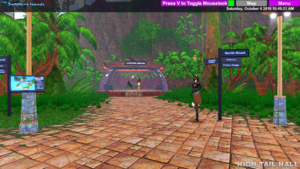 In October 2017, due to the pending discontinuation of Adobe Flash support and its increasing destabilization, HTH Studios announced that High Tail Hall and Red Light District would be moved over to the Unity Engine, which would be later followed by a new incarnation of the HTH Studios website. The first public Alpha version of HTH was released on February 17, 2018 [11], showcasing quality and gameplay improvements not seen in the previous three incarnations of High Tail Hall.

With the launch of the Unity engine version, Crowchild announced that High Tail Hall will be slowly re-branded as New Cyana as the game gets closer to being released.