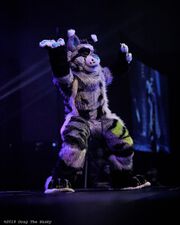 Hey Esker! is a fursuiter who is from and resides in Portland, Oregon, USA.[2]

Hey Esker! discovered the furry fandom in 2017 while working in Toronto, Ontario, Canada, and came across a Chevy Volt review video. He also became interested in dancing and the dancerfur scene and has since been participating and competing.

Hey Esker!'s fursuit was made by Yu Puffin and picked up early September 2018. Instead of an unboxing video he recorded an unveiling dance video with Yu's Lobo character.