Hex is an equine fur who frequently posts commissioned work to Fur Affinity, along with infrequent sketches of his own. He is easily recognized by his fursona, a grey dappled equine with a blue mane and tail. 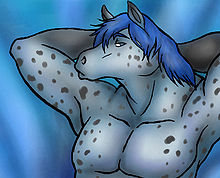 Hex's fursona is an anthropomorphic Appaloosa. His fur is a dull grey, spattered with darker dapples in an atypical Appaloosa pattern, featuring a deep blue mane and tail. Around 6'2" tall, he weighs around 195 pounds, and an average build, although he has been detailed with different musculature by the various artists whom his player has commissioned to draw the character. Along with his player, he is 19 years old and gay.

Other user handles Hex goes by include:

Hex's fursona was created in late 2004 as a Furcadia roleplay character. Hex has participated in the furry fandom going on six years after discovering Furcadia and becoming an avid player. Rarely holding one character or another for any length of time, Hex's player (who did not carry an official handle until his joining Fur Affinity during the tail-end of 2005) roleplayed a number of equine characters. After joining Zaush's art forum in 2004 under a different handle, he lightly participated in threads, until after displaying rather contradictory political beliefs decided to leave the website. After lying dormant for about a year, Hex rejoined the resurrected Fur Affinity website, where he continues to post work by artists he has commissioned. Hex also keeps a small, infrequently-updated LiveJournal, where he posts mildly important milestones or memes stolen from those on his friends list.

Hex's player was born in May of 1988 in his hometown of Fort Collins Colorado where he currently resides. He works full-time as an Electrical Engineer, but is not attending school. After deciding that engineering was not in his interests, Hex is currently searching for a job in the medical field. Hex attended Further Confusion in January 2007 and looks forward to Rocky Mountain Fur Con in June.

Hex is an devout gun nut and supporter of the Second Amendment. Constantly educating himself on as many firearms as possible, he considers himself a modest expert when it comes to the handling and history of military firearms, particularly those of Communist-bloc countries. He has since sold most of his collection, now owning only an AR-15 and a 91/30 Mosin Nagant.

An avid music fan, his favoured genre of music is 80's rock and pop music, favourite titles being "True Faith" by New Order, "Appetite" by Prefab Sprout and "Burning Down the House" by The Talking Heads. He is also a fan of many podcasts, his favourite being 2 Sense followed by CAGCasts.

Aside from Fur Affinity, Hex frequently posts on the CAG forums under the same handle. He has rarely, if ever, posted outside the Off-Topic Forum.