HeroicOnes, also sometimes spelled Heroic_Ones (born June 15 1987), is an Austrian music composer and artist, primarily known for his work in the adult furry muscle growth scene. While he stopped producing artwork in late 2010, he is still active as a composer, writing orchestral and new-age music as well as Synthwave. His lives with his fiancé in upper Austria. 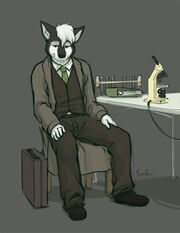 HeroicOnes joined the furry fandom in around 2005, first appearing under the alias Sooniecher (of which "HeroicOnes" is an anagram of). HeroicOnes joined Fur Affinity in 2010 and has posted regularly there, commissioning artwork of various different artists. The artwork posted was all growth-themed and revolved mostly around fetishes such as muscle growth and breast expansion. HeroicOnes has established himself as a known figure in the growth scene since. On July 7, 2018, he left FA, citing disagreement with the site management. His page and its content still exist, but no new content has been posted since.

He joined Inkbunny on February 2011. The page was created to publish artwork and commissions that were removed from FurAffinity during a policy change. The page is mostly barren, receiving rare updates.

He joined Twitter in November 2015. His Twitter page has become his main outlet after leaving FA. It is somewhat of a fan page for his character Eliot and consists almost exclusively of content including her and politically incorrect humor as well as memes.