Hazard (real name Michael), is a fursuiter who lives in Liverpool, United Kingdom.[1] His fursona is a Dutch Angel Dragon.

Hazard's fursuit was made by Cwoodsdean Creations as a partial on November 16, 2017, and a full bodysuit was completed on January 12, 2017. The fursuit cost a total of £1,225. Recently, his fursuit has been getting a slight remodel including the addition of LED's on the eyes, and a logo in-between his wings on his back. A fan is also planned to be installed in his suit head. 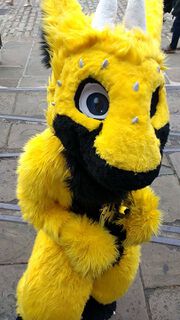 When Hazard was created, the original idea was to get the colors yellow and black (which came off a wet floor sign). The logo that is on his back, was thought of because he has the ability to interact with electrical objects. Things like radios, toasters, kettles, and small home appliances, though he could possibly control bigger electrical devices such as trains and cars if he put his mind to it. Hazard is a rather passionate and bold dragon, who likes to stand out against the crowds. They can be shy at times with new people, but normally very energetic and playful once they get to know someone. They especially love to play tricks with their human, sometimes using their powerful abilities to mess with electronics, sometimes switching on lights, and draining the Wi-Fi signal.

Back in the great war, Hazard almost fell into the abyss. As he lost his ring which shown he could return to paradise, but he didn't want to give up and let the abyss corrupt them. They fled the abyss as fast as their wings could carry him, and went into hiding on Terra for a short while, he slowly emerged a few weeks later, still slightly restless, but they were hungry and lonely. He knew that he had to leave his hiding spot, and decided to take the risk. Eventually, he came across a human. He could feel a warm and welcoming presence with this human. He got attached and felt rather protective over his new friend and has been protecting them ever since. Hazard now lives a happy life, and sometimes meets other Dutch Angel Dragon's who play with him and keep him company while he helps to protect his new human friend.

Hazard usually attends the Scouse Furs meets and other small events and conventions around the UK, primarily in Liverpool. He created a Dutch Angel Dragon meet at ConFuzzled 2017 which turned out as a rather big success.

Normally, every year he attends Liverpool Comic-Con because of how close it is to his home. He has plans to attend more conventions in the future including MFF, Anthrocon,and Eurofurence