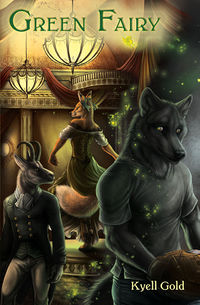 Green Fairy is a furry novel by Kyell Gold. It was published by Sofawolf Press in March, 2012.[1]

Green Fairy is Kyell Gold's first non-adult book. The novel contains characters that are involved in homosexual relationships, but there are no explicit depictions of sexual acts.[1] The novel's cover and interior illustrations are by Rukis,[1] and the cover artwork won the 2012 Ursa Major Award for Best Anthropomorphic Published Illustration.[2]

Green Fairy tells the story of Solomon "Sol" Wrightson, a gay wolf who yearns to escape the homophobic small town he lives in.[1][3] If he can just survive his last year of high school, he can go live with Carcy, his Internet boyfriend, for the summer. But when he loses his starting spot on the baseball team and converts to vegetarianism — a wolf, giving up meat! — his father threatens him with a hot, muggy summer working in the peach cannery unless he gets his act together.

Sol's teammates, who suspect his sexuality already, will not make it easy for him. But even with nobody on his side except his best friend Meg (a sardonic otter goth girl who is even less popular than he is), the Sol finds answers and solace in an unlikely place: a 1901 book about a tragic gay romance in the bohemian district of Lutèce, around the famed Moulin Rouge. Inspired by the spirit of the era, Meg and Sol share a glass of absinthe, with startling effect: Sol begins to dream that he is a cabaret dancer named Niki, offered a chance to escape his difficult life through romance — at the price of his beloved art of dance.

When the dreams seep into his waking life, Sol adds "going crazy" to his worries, and the problems of a couple that lived a hundred years ago to the ever-growing list of his own. To save both Niki and himself, Sol will have to learn the difference between reality and illusion, and discover what love and life mean to him.