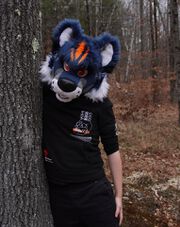 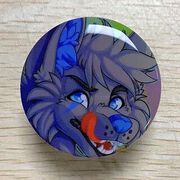 Glitch custom made phone attachment (made by Corgi Beans)

Glitch is a freelance video editor, part-time YouTuber, theater technician, and stand-up comic. He started doing stand-up comedy routines in 2015. In 2011, he found the furry community, a place where he felt he could belong. He is also currently performing stand up routines at open mics throughout the furcon schedule, and sometimes in the city itself.

Glitch is the creator of Theater Furs and the director and writer of Yiff: the Musical (2020).[citation needed]

Glitch is a male cyborg werewolf with lots of charcoal grey and grey schema, as well as a lot of touches of neon blue.

He got his fursuit on April 17, 2019 that he posted the video MEET EERIE! (MY NEW FURSUIT) on Youtube.

Glitch has been doing YouTube since the age of 8, starting on the site with his first channel around 2007. He made the major switch to his current channel in February 2012, and is currently still producing videos on the channel to this day. It has gone under several different names such as rangerred, MCManiac and last but not least, Glitch. Over the years, he's made 500+ videos total across all channels but his persona Glitch has only made around 120.