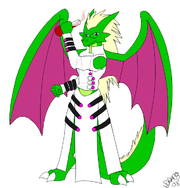 Dr Giles Gourry EuDraco, commonly known as G.G. EuDraco (born 1985) is a sea-green, water-affinity dragon, currently located in the south-central area of the United Kingdom. Since discovering his talents as a scientist, he has embraced creativity within the furry fandom as an author, photographer, and fursuiter. Between 2008 and 2011, he was the producer and presenter of the chipmusic podcast, POHD-CAHST!.

EuDraco also actively participates in events both within and outside of the furry fandom, through his fursuit Quarks Lepton.

Profile and presence in the United Kingdom[edit]

Being of an unknown origin, EuDraco connected with a human in 2001, generating an otherkin. Since then, minor details of his previous form have been discovered at random, such as his role as a 'Truth Merchant', and his affinity towards cold water. A name was to be produced that could easily identify the draconic character, and the resultant Giles Gourry EuDraco is still used to this day, commonly contracted to 'G.G. EuDraco' for the sake of brevity.

Residing in the United Kingdom, EuDraco has been a UKFur since 2001, and started attending HantsFurs and LondonFurs meets in 2003, leading to a short burst of popularity. That same year, disagreements with the chief LondonFur organizer, Rapido, led to EuDraco undergoing a state of exile. Since then, he only attends furmeets on an occasional basis, causing a fade into obscurity.

EuDraco has been providing an active voice of analysis and criticism for the UKFur community. This has led to a varied response; from praise on his neutral and scientific language to disapproval as a result of his former, jaded past.

Contributions to the Furry Fandom[edit]

In 2001, EuDraco started his contributions towards the fandom by becoming a pencil artist. Its modest success was discontinued in 2004 when studies required a higher priority. Since then, he has produced works in other fields, such as amateur photography, weaving and literature; his most popular work currently being his 2006 work, Chemiluminescence.

To showcase EuDraco's work, the website The EuDracos Non-Profit Organisation was generated in 2001. Transferred to the FurNation servers in 2004, the website has gathered a small following and was updated approximately every six months. In the same year, EuDraco's widespread attempt into Furry Philanthropy

Online, he frequents the online world of Tapestries MUCK, and remains active on both Twitter and Telegram.

EuDraco has a full fursuit from Hybrid Studios (Fishie Wishes/Shirik),[1] although he frequently wears it as a partial[2] due in part to the awkwardness of putting it all.[3]

Obtaining a Master's degree from the University of Surrey, EuDraco faced unemployment until an offer to study for a PhD in Quantum Chemistry from the University of Southampton. He hopes that he will obtain enough experience, tenure, and respect, to match that of the popular American Furry Scientist, Uncle Kage. In 2006, he proclaimed the uncontested title of 'UKFur Furry Scientist', which he holds with pride and enthusiasm to this day.

EuDraco is also a Pokémon fan, and his review of their 2019 pop-up store in London was posted in the Metro.[4]

At 5.21am on 1st April 2008, EuDraco posted an entry on his LiveJournal, stating that he was to take over the organization of future LondonFur meets as a result of an agreement between himself and the retiring organizer, Rapido [1]. Specific letters through the journal entry were italicized, which when collated together, spelled the words 'April Fool's Day'. Most viewers commenting highlight this hidden feature and did not take the statement officially.

As a result of this, Rapido was forced to prematurely release the name of the genuine future organizer, Spargue, with the additional statement:

"...this person has been a constant source of unrest within the londonfurs due to previous incidents, and unfortunately this person has tried to trick you all into a lie, therefore myself and spargue have had no option to but to ask him not to come to a londonfur meet again until such time as he can prove he will no longer upset and deceive members of our community!" - [2]

This was met with criticism from various LondonFurs, who felt that the punishment was too harsh for the situation. Increasing pressure upon Rapido to overturn the ban forced him to dismiss his statement as a returning April Fool's joke. Since the ban was originally enforced after midday, this reason was met with incredulity.

At 5:21 pm on the same day, EuDraco issued a formal apology on his LiveJournal, plus an overview of the event on his podcast. He has decided to keep the original entry, along with its comments for archive purposes.