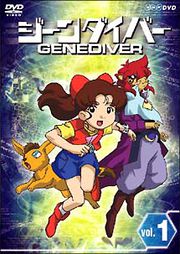 Cover of the vol.1 of DVDs

Gene Diver (ジーンダイバー) is the Japanese hard-SF anime broadcasted from 1994 to 1995 in the TV program for kids "Tensai TV-kun (天才てれびくん, Genius TV-kun)" on NHK Educational TV. The characteristic of this anime is the use of the animation and the real video combined with 3DCG, and the latest academic palaeontological and SF theory at that time.

In the 21th century, kids travel "the virtual world", simulated and powered by the quantim computer and there collect the genes of extinct ancient animals in order to contribute to the further expansion of the simulated world into the older era. Yui (唯), the protagonist 11 years-old girl was one among them, travels the North America in the virtual world in the Miocene era. However, a trouble occurs. The quantim computer went out of control and as a result the real world conbined with the simulated world. And Yui was not able to go back to the real world.

Then, the unknown anthropomorphic mice-like human appeared toward Yui. It is Puglaistik (プグラシュティク, named after Glaistig, from the Scottish mythology), evolved from Horned Gopher,[1] the extinct rodents. They are the inhabitants of the virtual world, i.e. they are the fictional human-kind, but they try to usurp the real world and conserquently to cease the human in order to make their real existence solid. Yui is determined to battle with them for the sake of human, along with the quadrupe canine-like boy, Pack(パック).

After the reconciliation with Puglaistik, a Puglaistik woman Til Nie Nog (ティル・ニー・ノグ) who became the comrade with Yui, signaled SOS from the virtual world. She is not able to return the world of Puglaistik. Through the investigation, it is found that the unknown exitance "Snaker (スネーカー)" interferes with the whole history of the Earth. Yui, Pack, Til, and Dry-6 (ドライ6), the alien from the satellite Europa, is determined to battle with Snaker for the sake of the all human-kind, no matter what of species. 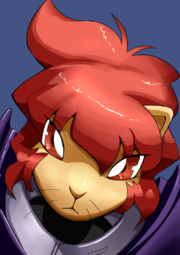 All the name of Puglaistik is from Celthic mythlogy, for example Til Nie Nog from Tir na nOg. All English name is provisional.

This animation has never been on aired in English and other languages, and even in Japan has not re-broadcasted since the last broadcast in 1996. In 2003 the DVD was released but it is out of order as of 2017.

Although the half of main characters is not kemono/furry, Til was popular on Japanese kemono/furry fanzine since its broadcasting. Especially Mahyo Sendo (扇堂まひょう), who was later one of the founder of KEMONERS and KEMONERS02, launched the fan website "GENEDIVER".[2]