Icon of Gazi by Alex Dachshund

Gazi first heard about the fandom in early 2012 on the humour website Cracked.com, and has considered herself part of the furry fandom since late 2012. Her art is mostly traditional, although she will draw digitally on occasion. 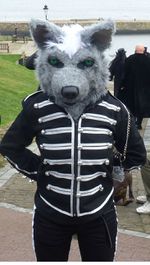 Gerard Wolf is heavily inspired by Gerard Way of My Chemical Romance.

Gazi's original fursuit character, Gerard Wolf, is a male grey wolf with white hair and green eyes.[3] He was built by Curious Creatures and debuted at Whitby-Goth-Weekend in November, 2013.

Lacey on her first outing

In October 2015, Gazi purchased a second suit; a brown dachshund named Lacey (or Doxie Lacey), made by Growly Lobita.

Gazi attended Anthrocon 2013.[4] She also attended Megaplex 2014, which was the first time Gerard Wolf appeared at a convention.