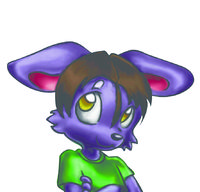 Garuru is a furry artist from Mexico. His fursona is a wolf-rabbit hybrid. 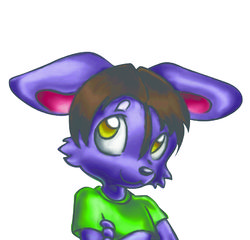 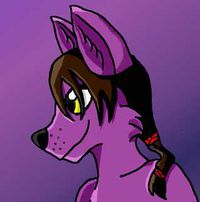 His fursona is a young anthro Wolf-Rabbit with yellow eyes and purple fur. Name Garuru Lupo . He use to be an ordinary character that through the ilustrations where he appears, tells moments from his real life, fantasy concepts and thinking ways. Originaly he was only a purple wolf, but due to his own representation as a rabbit in some ilustrations, he was transformed into an hybrid between those two species. Wolf and Rabbit. The permanent wolf characteristics are his muzzle and body, while his ears, tail and paws are rabbit-like.

He loves cute things. Besides that, he have two secret fetishs. And he's always in complicated relationships. A happy guy yet shy. Somewhat silent but pretty loyal to his friends. He deals people the way they deal with him. He's very distracted and deeply sensitive. He always tries to don't fight with the others. Very affective but cold in painful situations. Tends to forget stuffs

From japanese: "garuru" (ガルル) the japanese onomatopoeia that represents the howling of a wolf.