Gargoyles are fantastical beings derived from representations of creatures constructed as water spouts on buildings throughout the ages, particularly medieval cathedrals. The term is derived from the French word gargouille for throat or gullet, but has since been applied to purely artistic decorations. Gargoyles have been found in multiple forms since antiquity and usually take the form of grotesque animals or demonic figures, winged or otherwise, their presence was also thought to ward off evil spirits.

Gargoyles also obtained fame in the Disney series Gargoyles, created by Greg Weisman and aired from October 24, 1994 to February 15, 1997. This series featured a number of gargoyle characters and was targeted at an older audience than usual Disney productions, gaining much critical acclaim and attracting a number of big names for voice acting of the series. A following has arisen around this television series and fan art and fan fiction is not uncommon. An annual convention, Gathering of the Gargoyles, celebrates this series and is a popular event with some furry fans. Many members of this fandom have in turn crossed over to the furry fandom, sometimes with gargoyle fursonas. 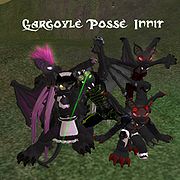 A group of NWS gargoyles in Second Life

Gargoyles in the anthropomorphic fandom are relatively rare, but some do exist both online and off. Korul Al-Wassar is a gargoyle fursuit created by Andrew Pidcock, and on Second Life, the avatar creator Whinge Languish has popularized a gargoyle form so that gargoyle fursonas may exist there.