Daimhín (also known as Gage; born September 21, 1994) is a furry who lives in Kingston upon Hull in the East Riding of Yorkshire within the United Kingdom. His primary fursona is a male Barasingha (Swamp deer) character.

Daimhín first officially declared himself a member of the fandom in mid-2010, once he signed up for Furry Teens Forums.[1] He later went on to to become a moderator on the forum in early-2012,[2] and an administrator in 2014.[3]

Daimhín's primary character is a Barasingha similarly named Daimhín. His character is a male Barasingha characterized by his reddish-brown coat, along with white mottles, twelve-tined antlers, unguligrade legs, messy medium brown hair and cloven-hooves. His character has gone through numerous renditions and redesigns. He also possess a Sika deer character named Gage, a Vicuña named Andrés, a Blue tit named Peter, and a sheep named Chip. Daimhín's charcaters exist in a wide variety of forms including anthro, feral and cub.

Gage's anthro form is bipedal and is typically portrayed as a teen-aged or young-adult buck. He's usually around at least 5'10 foot tall (6' 5 with his antlers taken into consideration) and possess a thin and slender physique. He moves swiftly and elegantly.

As for his personality, he's very empathetic and is highly passionate for that whom he may care for. His character can also exhibit shy, anxious and timid behavior. He can sometimes seem withdrawn and afraid around strangers and the unknown, but once he opens up to others he's more than happy to socialize. Typically he's care-free and appears to deeply love life. Though there's also somewhat of an arrogant, temperamental and hyper-competitive side to him which occasionally surfaces with mixed results.

His interests and hobbies primarily revolve around his passion for the natural world. He has a deep love and devotion for his natural surroundings, having lived among the woods and countryside all of his life. He enjoys horticulture as well as observing plants, animals and fungi in their natural habitats. His interest in nature also fuels his passion for literature, the arts and sciences; what he believes is one of the best ways which one can view the world. He spends a lot of time reading books to enrich his mind. 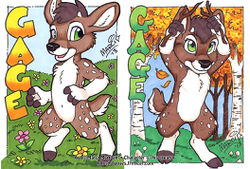 A littler version of Gage's character created by Marci McAdam. These two badges are a part of Gage's series of seasonally-themed badges.[4]

Another version of his character includes a younger version of his character, a Babyfur. Typically aged between 2-5 years old, this iteration of Gage's character is only a fawn. He's highly adventurous, playful, loves exploring and is usually highly captivated and curious about his surroundings. He also loves various items such as his flowers, plush toys and food. Sometimes he can be easily frightened and upset, but with reassurance and help from those close to him, he'll conquer all of the obstacles of growing up.

The final version of his character is his feral form. Naturally, this version of his character isn't as sapient as his anthro form, and appears much more bestial. Despite that he's fully able to talk and can manipulate objects surprisingly well without hands. He's fully quadrupedal, walking upon four long, gracious legs. He enjoys walking, sparring, eating and exploring his natural habitat.