Fuzzweekend (previously the Belgian Fuzzcon) is a furry convention held in the Belgian Ardennes in the Liège province, Belgium. It went on an extended hiatus after its first instance in 2013, but is to be resumed in 2019 with a new name. 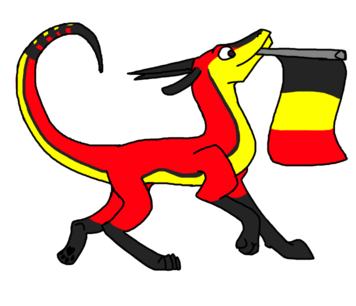 The convention's website stated: "Fuzzcon is a small furry convention that will be held in the Belgian ardennes, starting at thursday the 22nd of August, till sunday the 25th of August. The main reason of its existence is to offer a cheaper and smaller convention than Eurofurence, where furries from Belgium and neighbouring countries can learn to know each other, relax, and have fun."[1]

Pareldraakje was the sole organizer.

The registration prices were:

Activities, "Full pension (meals 3x a day)" and "Non-alcoholic Aldi drinks" were included in the price.[3]

Fuzzcon 2014 ("Fuzzcon & Wusky Dance") was announced for July 18-21,[5] again to take place in the Belgian Ardennes, but was subsequently put on hiatus.[6] In a post on the Fuzzcon forum, Pareldraakje stated the convention was being put off until the summer of 2015, citing the burden of organizing everything herself (although Wikke was listed on an unfinished staff page for 2014 which covered the combination of the event with his birthday rave[7]), budgetary problems (paying everything out of her own pockets with a net loss of about 100€), and a lack of motivation.[6]

The event website's domain name, which fell into disuse, has been re-registered. A new instance was planned under the name Belgian Fuzzcon for the Belgian Ardennes on 8-12 August 2019, with space for "26 fluffs".[8] However, by July it had been renamed to Fuzzweekend (both to avoid a clash with NordicFuzzCon and to defray expectations of convention-level programming), and scheduled for 16-18 August 2019 (Friday evening - Monday morning) at the Groepsaccommodatie Le Mont Saint Jacques in Trois-Ponts, over the Eurofurence 25 weekend.[9] Registration is 200€ (or as low as 180€ with early-bird or bring-a-friend discounts) and includes soft drinks and three meals a day. The venue has eight rooms with four beds each, for up to 32 people.