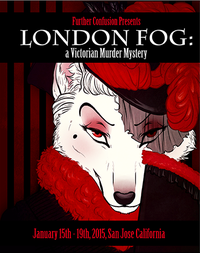 Further Confusion 2015 was the seventeenth instance of Further Confusion, held over 15-19 January, 2015, at the San Jose Convention Center and the linked Marriott and Hilton hotels in San Jose, California.

The convention theme was "London Fog: A Victorian Murder Mystery".[1]

The guests of honor were puppeteers Warrick Brownlow-Pike and Andy J. Heath, from the BBC television show Mongrels.[2] The convention's charity was Rocket Dog Rescue.[2]

Inside Edition of television were denied permission to film, but attended the convention undercover and without the knowledge of Further Confusion staff. After they aired the ill-gotten footage, chairman Dax posted an official statement criticizing Inside Edition's "disregard for our Code of Conduct and the privacy of attendees" and for filming attendees without informed consent.[4] Furries opinion of Inside Edition behavior was negative such as "shady", "non-consensual", "fucked up", etc.[5]