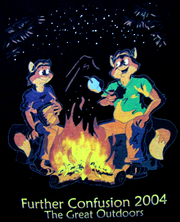 The charity auction benefited Bay Area Bears and The Exotic Feline Breeding Center. One painting, (Eyes of the Night by Goldenwolf) went for $10,000 at Further Confusion 2004, the result of a close, fierce bid battle between Flint Otterhall and a local appreciator of furry art.

Fursuits in the hall at FC2004