Furry Play was/is a furry video-sharing website. It had its roots on a dead ProBoards board.[clarify]

The site's objective was to create a primarily user-controlled environment based on suggestions, threads, and content posted by users, as well other things a user might be able to think of. Following this, the site atmosphere was very laidback, as users could be more productive in the shaping of Furry Play then most other sites.

The site contained a user-driven archive, loosely based primarily off of yiffstar's archive system. It allowed users to upload their work, then let a reviewer check to see if the work is furry or not.

The archive went under changes almost weekly, and there were plans for starting a Stories and Images section, while still attempting to keep the focus primarily on movies.

Starting in November of 2008, Furry Play launched an IRC-based Java chat. The chat uses Synirc.net for running the chat on the channel #holegan. As of May 2009, Furry Play has launched its own #furryplay channel using a mibbit connection.

The site allows users to post on a variety of topics, ranging from sexuality to requests for art. The forum is run by a group of moderators that make sure topics are age appropriate for the sections they are in.

In 2010, after Foxbox.cc's owners lost their domain to domain squatters, the owners agreed to let Furry Play host a backup of Foxbox on a subdomain.[clarify] This resulted in a partial integration of one of the largest furry animation and video archives on the Web. 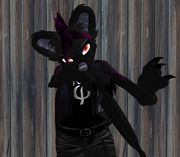 The mascot of Furry Play is Elizabeth (Eli) Sin, a Dryeena, a race of genderless hyena-dragons. She is Aurali's retired fursona.