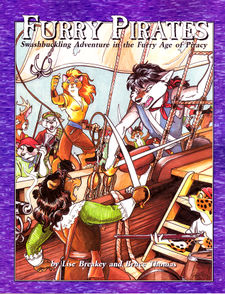 Furry Pirates is a role-playing game by Lise Breakey and Bruce Thomas, subtitled Swashbuckling Adventure in the Furry Age of Piracy. It was edited in 1999 by Trident inc, Atlas Games and illustrated by Terrie Smith. It has been written by Furries, for Furries.

Furry Pirates is set in the Furry version of the Golden Age of Piracy (1690-1720). The action takes place on the high seas in wooden sailing ships in the new world of the Caribbean sea, each nationality fighting for a part of the treasure.

The world of Furry Pirates is inhabited by intelligent anthropomorphized animals known as Furries who possess human characteristics such as opposing thumbs, erect postures, use of tools, and so forth. Furries in Furry Pirates evolved from various species of animal, just as man in the real world evolved from lower primates. Just as there are still primates in the real world, there are still ordinary animals in the Furry world.

The Halogen System is the same one used in the authors' previous game, Furry Outlaws.