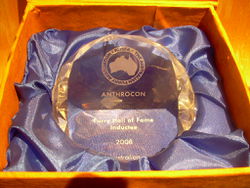 The Furry Hall of Fame was an annual award intended to honor the contributing members of the world-wide furry fandom community, who are inducted for their loyalty, contributions and undying commitment to furthering the fandom culture internationally.

Potential Hall of Fame inductees were discussed and decided upon annually by the past awardees. A unanimous decision had to be reached in order for someone to be inducted.

The Furry Hall of Fame was conceived by CynWolfe in 2008; the first induction was held that year at MiDFur X. At that time it was awarded by AUSFA, although as that was abandoned in 2010 it was taken on by Australian Furry Conventions and subsequently held at ConFurgence.

The last award appears to have been made at ConFurgence 2015 (for the Class of 2014). It is unclear why there were no future awards. 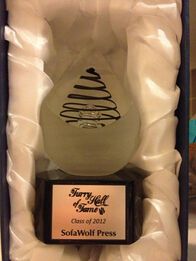