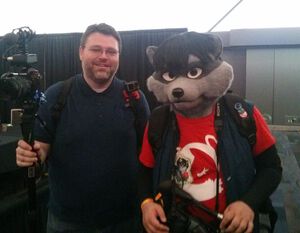 Jack Raccoon Fursuit with Wendell of Level1Techs at LTX 2019

FurryJackman, also known as Jack Raccoon and Jack Zhang, is a fursuiter who lives in British Columbia, Canada.[1]

Jack has high functioning autism[2] and is dealing with difficult mental health issues, regularly speaking about it on his Fur Affinity and Weasyl journals. Univaded Fox remained Jack's friend through said issues.

Jack is a graduate of The British Columbia Institute of Technology (BCIT) in the Broadcast Television diploma.[3] He was in the same class as Edzel Yago and Brandon Lee from Linus Tech Tips.

Jack was introduced to the furry fandom in 2009 after going to BC Furries fursuit bowling, and was active at the event monthly until he gravitated towards conventions like Howloween.

Jack has collaborated with Baby Cheetah and Univaded Fox in the past for VancouFur promotional videos and video tech work, lending his Sony PMW-EX1R and skill behind the camera for said projects/cons. He was video lead for BronyCAN, and did all promotional videos for them up until 2015.[4]

Jack Raccoon is Jack's primary fursona. He is a Raccoon that loves video cameras and video production. His fursuit was created by Oceanwolf and is a partial suit with arm sleeves, a tail, and optional sockpaws.

George Z. Fox is a micro fox/macro fennec character that Jack uses to express the macro/micro part of his personality. This character is currently close friends with James Darkglint.