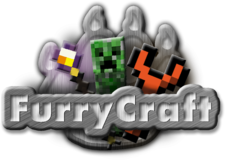 FurryCraft is a furry Minecraft group and website. The group was created on February 14, 2011, and was originally owned by Tanner Fawkes. The server and its then-current name, were bought by Nikk (a.k.a. "Sarge") on April 6, 2012.

The server was eventually updated to run a new mod-pack called Tekkit mod pack. The official site for FurryCraft Tekkit was located here. After Tekkit 1.2.5 seemed not to be slated for further updates, the group's users voted to upgrade the server to a mod pack called Feed The Beast. The server used the Direwolf20 mod-pack, with a few extra mods added on. The additional mods had to be added after the user downloaded and installed the Direwolf20 mod-pack.

Currently, in the year 2018 and 2019, the members of the old servers are using the Twitch App to launch into a new server playing the All the Mods 3 pack. The new server goes by the name "People and Paws", where all people, furries and humans, are welcome! You can find all the information to join them here: Click Me!