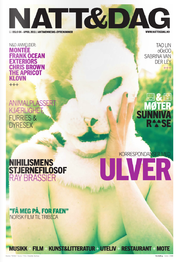 The rest of the fandom had no knowledge of the interview until after the article was published.[citation needed]