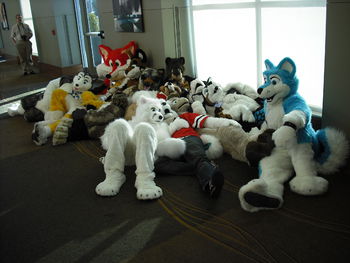 For the WikiFur improvement drive, see WikiFur:Furpile. For other uses, see Fur Pile.

A furpile is a group of furries who are at least partially one on top of the other, possibly in fursuits.

A furpile is often the result of a single furry taking a rest, thus attracting other furries, rather than deliberate planning. A furpile is typically not sexual, although sexual furpiles are often featured in media, such as the CSI episode Fur and Loathing. Another example where furpile was represented sexually in the media was the movie Crazy/Beautiful when the heroine's best friend said "...the term 'furpile' came up a few times" in reference to a past conversation she had while planning a party. Such portrayals of furpiles can and do lead to outsiders to believing that the furry fandom is extremely sexual.

Joining a furpile when one's weight is above a certain limit is typically frowned upon and advised against.