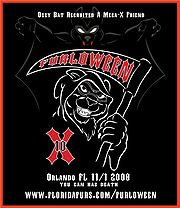 Furloween X (also Furloween 2008) was the tenth instance of furry party Furloween. It was held on 1 November 2008, with the theme "You can has death."