Fur What It's Worth

From WikiFur, the furry encyclopedia.
Jump to: navigation, search
Culture > Podcasts > Fur What It's Worth 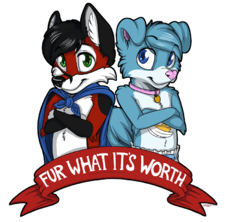 Fur What It's Worth is a furry podcast hosted by Roo and Tugs. Launched September 10, 2011, the show aims to serve as an "introduction to and exploration of the furry fandom" (the spoken description begins each podcast episode) and appeals to those discovering the fandom for the first time, those who are curious to learn about different facets of being furry, and even long-time furs with deep-dive questions and philosophical discussion. Each show strives to thoroughly explore the associated topic, through the lens of the fandom, all with a twisted sense of humor. The show mimics television and traditional media broadcasting, by diving its episodes into Seasons, which usually run from June to May. Broadcasts of the show are currently based in Salt Lake City, Utah.

FWIW airs episodes on a wide variety of topics, usually from a different angle than seen in other media. Most episodes explore a previously unvisited facet of furry in detail. While the show does revisit previous topics on a very limited basis, the cast strives to have a different angle for re-visits.

The following segments are currently featured in most show episodes:

Fur What It's Worth maintains a limited set of recurring episodes:

The show has had a wide variety of guests, from both inside and outside the fandom. Guests are often selected for their notoriety or knowledge, plus ability to speak clearly to the audience.