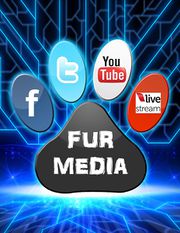 FurMedia is a furry social media service. Its mission is "To provide another voice & social connection with furries from around the world."

To further this concept, FurMedia, initially known as FurMedia and created by SpaceBear Sparx in December 6, 2011, attended FurIdaho 2012, a small new furry convention, providing webcast coverage of the event through their social media channels.[citation needed]

FurMedia staff vary between hosting, web design, social media moderators, photographers, and more. Each member has a badge created for them and acts as a representative of FurMedia when at social meets and conventions. Some comb the convention floor and or Artist Alley to scope out artists or talent to be featured on their live show. FurMedia has appeared at BLFC and MFF for live in person shows and plans on more to come. Their podcast is now availble on YouTube and currently broadcasts on furstream and other connections can now be found across the social medium.

To accomplish this goal, accounts were created on Fur Affinity, deviantART, YouTube, Twitter, Facebook, Furstream, Tumblr, Pinterest, Instagram, Weasyl and more. Furstream became the primary broadcasting tool for FurMedia because it offered the opportunity for its fans to interact with the hosts of the show.