FurDU 2012 was the third FurDU. It was hosted in the Watermark Hotel, on the Gold Coast, in Queensland, Australia, between the 27th and 29th of April, 2012. A total of 300 people attended.

The convention was themed "Carnival" (also referred to as 'Carnival Live'). This was the first year that a Furry Down Under theme was integrated into a hotel's con space, with the most notable theme specific decorations being red velvet stage curtains, presenter costumes, poster artwork, and new carnival themed events. 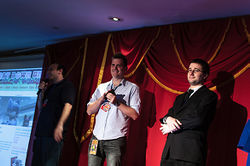 The FurDU 2012 program saw a number of major changes compared to previous years, the most obvious being the introduction of panels into the schedule, which up until 2012, had been an area of content providing that the convention had stayed well clear of. A total of 6 panels were held, these covered topics such as fursuiting, gaming, live performance. Two of the panels held in 2012 focused specifically on the Guests of honor areas of specialization, covering topics like the entertainment industry and furry podcasts.

2012 also saw the introduction of 'Carnival Live', a theme specific event that ran in the main con space on the Saturday of the convention. Carnival Live was essentially a furry themed Sideshow Alley which offered attendees the opportunity to play a variety of Carnival Games and win prizes. There was also a cotton candy machine inside the convention space offering free cotton candy to attendees.