Furry Down Under (also commonly referred to as FurDU) is a furry convention that is held annually on the Gold Coast, in Queensland, Australia and is currently the largest, most attended furry convention in the country.

FurDU was first held in the 'Vibe' Hotel, Surfers Paradise, between the 23rd and 25th of April, 2010. The convention was originally intended to be held in Melbourne, but it was later decided during the planning stages (and in conjunction with the original organizers relocating to Queensland) that hosting FurDU on the Gold Coast, a major Australian holiday destination, would prove far more beneficial.

Furry Down Under is a convention built around the core principal of making attending an Australian furry convention as affordable as possible. The official website stated that attending FurDU in 2010 for the three days it runs for should cost under $200 AUD for its attendees including all accommodation costs.[1]

FurDU runs for three days, with programming starting Friday and ending Sunday night (or early into Monday morning). The convention changes its programming each year, these changes are reflected by the addition of new key events and the removal of events that have grown stale in the opinion of the organisers.

There are several events and other facilities for fursuiters. These events change each year with the program, with the exception of the Fursuit Games, Fursuit Walk and Fursuit Photography which have been traditionally held since founding.

The Headless lounge, an area that only fursuiters can enter where they can freely un-suit and relax, has progressively increased in size each year as the number of fusuiters in attendance has also grown. Between 2010 and 2012 the headless lounge was a simple cordoned off area with a gazebo set up for privacy, this area usually shared one of the smaller convention spaces such as a game room or chill out area.

The transition to the Outrigger Hotel in 2013 saw the introduction of a separate 70 square meter self contained room used only as a dedicated headless lounge. This was the first time that the convention had ever been physically able to allocate a separate room specifically just for Fursuiters. In 2014 the same layout with this dedicated room was repeated, however the fursuit lounge was scheduled to open later on day one as this room was temporally used to house part of the initial registration queue on Friday morning.

Since the conventions founding in 2010, FurDU has offered dealers tables for attendees to sell artwork and merchandise. Between 2010 and 2012 due to hotel space restrictions, the dealers area always shared a common area with the main convention space and it was only possible to offer a strictly limited number of table spaces.

While available table spaces improved at the Watermark Hotel in 2012, permitting a larger number of dealers to trade, it wasn't until 2013 with the transition to the Outrigger Hotel that FurDU dealers were for the first time able to be provided with separate designated dealers den in which to trade from. In 2013 and 2014 the dealers den trading hours were restricted to only two days in order to allocate the dealers room for other convention activities on the third. 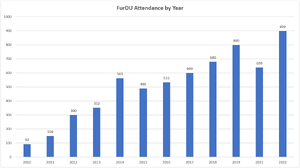 FurDU has been held in the following locations;

*2015: A drop in attendance occurred in 2015, which is believed to be attributed to severe weather closing airports on both the Gold Coast and Brisbane on Friday May 1st, 2015 (the first day of the convention) which resulted in a number of flights being cancelled.
*2020: FurDU 2020 was postponed until 2021 due to issues related to the COVID-19 pandemic.[3]

Furry Down Under features unique theme for each year that it runs. Although the convention has officially been themed since its founding in 2010, this became much more apparent in 2012 during "Carnival" where the venue began to reflect the theme more clearly through the use of stage props, decorations and theme specific events. Furry Down Under was postponed in 2020 due to the COVID-19 pandemic.

Furry Down Under has sponsored the following charities;

Prior to its incorporation in 2016, FurDU was owned by the founders; Oz Kangaroo and FlameDrake, and operated with a volunteer committee of close friends.