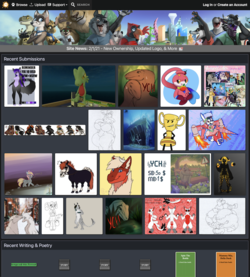 Fur Affinity, also known as FA or FurAffinity, is the furry fandom's largest online community, focusing on the promotion of art, music and stories.

The site was created in 2005 by Alkora as an alternative to various art community websites such as SheezyArt and DeviantArt, distinguished by allowing artistic freedom of expression regardless of content rating. It is led by Dragoneer.

Fur Affinity was launched on 16 January 2005 as an alternative to SheezyArt, with the forum going live on that date and the main site being transferred a few days later from FurPawz. Since then, it has suffered a few outages, most notably a month-long downtime over July 2008, but always managed to recover. In 2011, Fur Affinity announced a major revamp in connection to FA: United 4.[2]

Fur Affinity's features for users include the ability to allow users to track new updates from particular artists; highlight favorites; and upload a wide variety of art (images, music and stories). The site attempts to promote community through its comments system and individual journals.

While works of all ratings are accepted (other than photographic nudes, images whose intent are to slander or discredit others, and minors in sexual situations[4]), art rated as mature or adult is not shown to visitors, or to users who have not specified it as a preference (which requires giving a date of birth indicating an age over 18). Keywords and tags can be added to works, though a feature that allowed blocking based on tags was disabled due to performance issues.

Fur Affinity's search engine was "temporarily disabled" in mid-2006 due to it taking up too many resources.[5] A faux search feature was implemented for April Fool's Day 2007, much to the chagrin of some users.[6] Search was reimplemented on 5 February 2009; it was initially labelled "That Thing You Want" and randomly included rickrolls.[7]

Privacy features were added in May 2012 with users being able to block guests from seeing their content with messages such as "[Username] has elected to make their content available to registered users only" and being able to hide their adult, mature+adult, or all favorites from public view.[8]

The site's artwork is inaccessible in Russia, as d.facdn.net (which serves the images) is listed on Russia's Internet blacklist. The site itself works fine, and even shows thumbnails.[citation needed]

On 13 September 2015, to coincide with the conclusion of FAU 2015, Fur Affinity unveiled a Gallery folders system[9], which had been promised in one form or another since shortly after the site launched in 2006. Some users[who?] criticized the way folders were implemented,[citation needed] including disappearing artwork after its implementation (found normally in the scraps folder), and the poor to no documentation regarding them.

The FA development team was working on a new backend system called Ferrox which was to be used for the next major revision of Fur Affinity, and was to be made available as FOSS (Free and Open Source Software) for other sites to use. By late 2009, the development of Ferrox had stalled, with the last change to the code being made on September 7, 2009. Days earlier, net-cat, who was acting as the lead Ferrox developer after Eevee had left, announced that the code was to be frozen, citing that "Nobody knows Python."[10]

Fender is the Fur Affinity mascot, created by artist K-9 based on a character concept by Preyfar. He is half fox and half ferret, a "ferrox". On April Fool's Day 2007, Fender was depicted in the site's banner as a female dragon. This dragon was made a separate character and an official mascot of the site in May 2007, and named Rednef, or "Fender" spelled backward.

Being furry fandom's largest social art site for many years, Fur Affinity has been host to strenuous discussions on various topics, including the presence and later absence of cub pornography, staff appointments and departures, allegations of staff and user improprieties, and debate over what consists of suitable content for the site banner. Incidents of downtime and unauthorized access have also been discussed, both on Fur Affinity's forums and throughout the fandom.

Fur Affinity was previously owned by Ferrox Art LLC, a limited liability company founded 25 February 2008, registered in Lenhartsville, Pennsylvania.[11] On March 19, 2015, it was officially announced that Fur Affinity had been acquired by IMVU; the transaction had occurred in January 2015 but had not been publicly announced.[12] On February 1, 2021, Fur Affinity became independent again with ownership going back to Dragoneer, who has placed the website under the operation of a new company called Frost Dragon Art, LLC.[1] 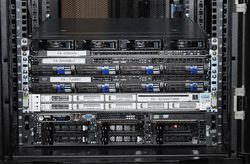 Fur Affinity owns various server hardware, some of which has been re-purposed or retired over time. Between 2010 and September 2020, the site was hosted out of an InfoRelay[23] (later acquired by Atlantic Metro) data center in Reston, Virginia.[24]

In April 2020, FurAffinity announced it was moving to a new "hardware platform" it called "King Ghidora"[25]. FurAffinity did not offer many specifics on this platform other than that it utilized "112 CPU cores, 1,536GB of memory, [and] 153.6TB of enterprise SSD storage" and that it was purchased from income from the FA+ subscription service. On September 9, FurAffinity announced the move was complete.[26] This transition relocated the FurAffinity servers to an undisclosed location, with Dragoneer only saying they had to ship a 14 Terabyte hard drive "cross country" as part of the move.[27] It is possible the servers were moved into a facility controlled by then-owner IMVU, which is headquartered in California.

While hosted at an InfoRelay, FA had access to 2Gbps of bandwidth leased as of November 2015.[28]

In Spring 2015, additional hardware purchases were announced, in connection with the IMVU purchase.