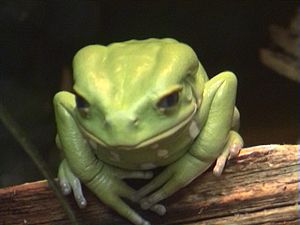 Frog is a very generic term encompassing a huge subset of the taxonomic order Anura. Like the related toads, frogs have large heads, compact bodies, webbed feet, and powerful long hind legs for leaping and swimming. Frogs are best distinguished from toads by their smoother skin and preference for water.

Because they lack a tail, frogs are seldom seen in furry circles, but they are not entirely unknown. Perhaps the best known frog character is Kermit the Frog, one of Jim Henson's Muppet characters, voiced originally by Henson himself.