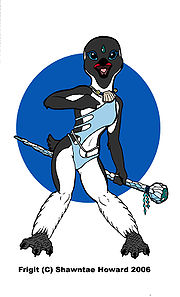 Fright is a character in Extinctioners.

Frigit is an elemental, like Phenix. While Phenix is an elemental known as a phoenix, which represents the element of fire, Frigit is a young Aquanix in training for the element of water. Being rebirthed only 98 years ago, Frigit would have the mentality of a mortal late teenager, so she is very impatient and often reckless in her duties.

Unlike Phenix, who is a artificially created female phoenix, Frigit and her line of Aquanix are always representative of the female gender. All ground based elementals represent the Mother Earth motif, life givers, thus they take on female forms. Air born or otherwise elementals such as Wind, Fire, Electricity are always (normally) represented by males. Each have chosen an avian form as their mortal forms.